Is there a Fat Acceptance Movement?

I found this post, and wanted to share. I'm sure there will be both sides to the arguement, and I have my own personal opinions as well, but it is definitely interesting, and makes you think. I definitely think he has numerous valid points, especially how certain industries are geared. Anywho, enjoy and have a great weekend!!!
---------------------------------

Are we being FAM-ished?
Let us pause to consider the Fat Acceptance Movement, or FAM. There doesn’t actually appear to be any all-encompassing association by that exact name, but there certainly are a lot of smaller groups and organizations popping up lately, devoted to the principle that overweight and obese people should be given the respect and acceptance accorded to any other citizens.

With names ranging from "Big is Beautiful" to "Fat!So?", these present themselves as simple grassroots enterprises begun by ordinary folks of extraordinary weight in order to counter what they see as the increasing, unjust, mean-spirited and discriminatory notion that being overweight or obese is not good for the nation’s overall health or economy.

But all all of these suddenly proliferating groups legitimately “grassroots”? The fact is, whenever there is a national debate over any issue or principle, the outcome of which could affect corporate profits of any kind, the field suddenly becomes littered with dozens of “grassroots” groups that turn out to be “astroturf” front groups funded and directed by industries and companies with a financial stake in the matter.

For example, note the numerous “outraged citizen” protest groups springing up in opposition to the Obama administration’s health care reform: it turns out that an awful lot of them are underwritten by Big Pharma or Big Insurance or Big HMO or some other Big Interest Group out of fear that reform might make it smaller. Shouldn’t we be wary of similar special interests possibly creating and using “grassroots” fat-is-fine organizations to essentially argue that obesity is no problem and the more fat people, the better?

It’s not hard to imagine who these special interests might be.

Are you kidding? he prospect of a health-and-calorie-conscious American public actually makes them physically ill. To experience their grateful generosity, just write and tell them you’re starting a group called Justice for the Jumbo and could use a bit of seed money.


Big people need big wheels, your SUVs and vans, the kind of king-sized vehicles that also deliver king-sized profit margins, as opposed to subcompacts and mini-coupes you can hardly make a buck off of.

A leaner and trimmer America would perforce be a healthier America, which means an America requiring less medication. Diabetes drugs alone would take a multi-million dollar hit in sales.

The very idea is enough to get Pfizer and Bristol-Myers writing checks to The Large Liberation League.

The diet and weight loss industries

Surprised? Don’t be. Oh sure, an America dedicated to becoming slim would be a boon to these enterprises over the short term, but in the long run, the fewer fat people, the fewer customers, a notion they find appalling.

The list of possible fat acceptance “angels” goes on and on, from the Sugar Cane Growers’ Association to hundreds of Big & Tall clothing stores. This is all hypothetical, of course, and doesn’t necessarily mean that fat acceptance activists are fronting for special interests and promoting pudginess for profit.

But if the head of, say, Give Fat a Chance has a press agent and personally weighs less than 200 pounds, be very skeptical.

(By Robert S. Wieder for CalorieLab Calorie Counter News)
written by Cheryl Chamberlain at 9:53 AM 4 comments:

Hello my lovelies!! I know I've been bad at getting around and checking out everyone's new posts and blogs, and I apologize. Life has been crazy busy as you can imagine. The new night/weekend job is going good. it's the polar opposite of my day job. It's relaxing, not to demanding, and I get to work with some great people that make it fun. The insurance office, the main/day job, has been insane the last month or two, and it's great that business is booming, but at the same time, with all the new business, it's hard to keep up the maintenance and regular day-to-day followup with all the existing business. Especially the filing (which I HATE! LOL). I'm hoping to get some extra before and after work hours in to clean it up a bit. It's driving me nuts!!

With working so much, it's been hard to keep up with what Liam's been up to. I've called on my breaks, and the internet is down at home, so I can't "Skype" with him, but they're starting up school soon, and I can't wait to hear about all his classes, and his club that his stepmom signed him up for called The Builders Club, in which they build little robots, and then compete in an age appropriate "Robot Wars" type setting. I think he'll enjoy it. I'm trying to get together a little care package together for him and his siblings, but I haven't had time to shop, and hopefully I can get it done this weekend and mailed off!!!

Today I dropped off our puppy Bear to a friend. With all the hours I'm working, I can't take care of him. I can't keep him out of his cage because he destroys and goes to the bathroom everywhere in the house, and I certainly don't want to keep him locked up in his cage all damn day, so it's a good fit. She has an older daughter, and two younger kids that have the time and energy to play with him. We still have Maddie dog and Shamrock, my kitty, and I'll still be able to visit Bear.

I don't have to work tonight (thank gawd!), so I'm gonna just settle in and watch "Sunshine Cleaning". I have a 15 hr day tomorrow, and then I work Saturday and Sunday night. Hopefully I'll get outta work on time Saturday, so I can head over to Crusher's parents for the little bonfire they're doing for his sister and dad's birthdays. I have Tues, Wed, Thurs nights off next week, so I might even be able to get a little karaoke in! Haven't been out in weeks. Haven't had time for the gym either, which I've been trying to figure out a schedule to that around my hours. It's been difficult, because when I DO have time off, there's so much to get done, and that gym is on the other side of town. Not sure what I'm going to do. Guess I'll have to figure that out.

I know I got the 2nd job for the money, but I think in a lot of ways I got it so I don't have to be home. Some days it's good, others, I just want to break down and cry. But it's all good. I'm moving on, and feeling better about myself again. It's amazing how events in your life make you change your views, how you look at things, and help you prioritize, while you watch others stay the same course, never put forth any effort, or that little extra, and know they are only setting themselves up for the same ol, same ol. That won't be me.

Tomorrow marks two years since my brother Mark took his own life. I've thought about him so much these past few weeks. I actually ASKED to work tomorrow night, because my thoughts are definitely not something I want to go out and drink with. Nothing bad... just not wanting to intoxicate my sorrow and make it 100x's worse, ya know? I love you Mark, and I just know you're out there somewhere, seeing how beautiful and all grown up Hannah looks. She's amazing Mark. Love and miss you bro.

Anywho, I'll try to get on and catch up with everyone when time allows. Have a kick ass weekend!! 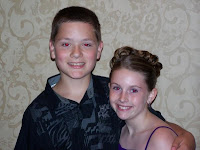 Just wanted to let all those that have been messaging and emailing and being complete angels know that things are going ok. They may not be fantabulous, but I'm slowly getting back on track after coming back from Chicago for my cousin's wedding. Separation and divorce is never easy, but we'll get through it. There's so much to say, yet no where really to begin on what's been all happening these past few weeks, so I'll just leave it be. I know a lot have been worried, asking questions, etc., but a lot is private, and I love my husband enough not to go into all of it. The fact remains that we are the best of friends, and nothing will ever change that. We've basically moved on with other people and realize our relationship, although based on friendship, would never grow into more than that. I think our marriage was more based on being scared of being alone than anything else.

The wedding back home on July 31st was beautiful, and I was able to see all my family, which was so great. Got to see Liam too, who is now 5'4" and 116 lbs at 11 yrs old. OY!!! My late brother's lil girl Hannah is getting so beautiful (that's a pic of Liam and Hannah). They look like teenagers and they are only 10 and 11!

Being back home has been hectic, as I've been doing a lot of soul searching and talking with friends and family, finding my lil place in this world, and keeping myself busy with work, especially now with my part time job in the evenings and weeekends. My 36th birthday was this past Saturday, and I went out for a bit, but not long, as I was beat from working, and things going on at home that have kept me from sleeping well at night. Sunday I woke up, and took my birthday money and did something that I haven't had done in forever... went and got my hair professionally cut, colored and highlighted. Most that know me know I'm a true tomboy, and really not into doing "girly" things for myself, but a few people, including my soon-to-be-ex, said I needed to take my birthday money and pamper myself instead always using it for bill money. So I did.

Now it's back to work, and I have three days in a row where I work both jobs from 9am to 11pm and midnight on Friday. I definitely need to start getting back to eating right, and getting the proper amount of rest before I burn out before I even begin!! Although in a lot of ways I feel I'm starting over, but in others, I feel like I'm just finally living life, and doing things MY way instead of always worrying about what others think. It's time in my life to start doing things for ME. Not in a selfish way, but in a way that helps me to improve my physical, mental and emotional health. I've always taken care of others, and now I have the opportunity to take care of myself. I miss my boy, but I know he's in a good place with his dad and stepmom and his siblings, all of whom I love dearly.

I plan on getting back to the gym this weekend, as there is absolutely no time today, Thurs or Fri for it. Walking around my 2nd job for 4-5 hrs a night is good for those days.. LOL.

Anywho, I'll try to blog when I can, but just wanted to say thank you again to all of you for letting me know you were there for me. *hugs* Have a great week!
written by Cheryl Chamberlain at 1:33 PM 4 comments: