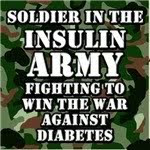 Being a type 2 diabetic, I'm always checking articles, looking for and confirming ways to help me control my glucose levels. Proper diet and exercise is always a key factor in that, otherwise I feel lethargic and, well, just plain.. BLAH!

Complications from diabetes kill more people than AIDS and breast cancer COMBINED! It's definitely something people have to be aware of, because it's symptoms are often passive, and people don't take them seriously enough to get themselves checked out. If you haven't already, I encourage you to pick up, borrow, check out Jillian Michael's book "Master Your Metabolism". I love this book in the fact that she breaks it all down, and explains a lot of things you might not know about how your metabolism works, and things that can affect it. The following was her daily diet and fitness tips last month (told you, I'm still catching up with my blogs!! LOL) and she just puts it straight out in laymans terms. Here is that article:

Get a Grip on Insulin's Ups and Downs

One of the endocrine system's most important hormones is insulin, which plays a critical role in how your body uses food. When you eat, your digestive system breaks food down into glucose, and the glucose circulates in your bloodstream (where it's often referred to as blood sugar). In response to the rise in glucose after a meal, the pancreas releases surges of insulin, whose job is to clean the glucose from the blood. Insulin directs some of the glucose to the body's cells, which use it for energy. Some of the glucose is diverted to the liver, where it's converted into glycogen (stored glucose) for later use by the muscles. Insulin then helps turn any leftover glucose into fatty acids and stores them in fat cells, where they can be tapped later for fuel.

Problems arise when your body starts creating too much insulin, which can happen for several reasons. One of the most common is that you ate too many highly processed, refined carbs, such as white bread or pasta. Such carbs increase blood sugar dramatically, requiring a rush of insulin to clear the blood. If your blood sugar surge is really dramatic (as it would be if you ate those refined carbs on an empty stomach), insulin overreacts and works twice as hard to clean the sugar from the blood. This overefficient removal of sugar means that your blood sugar concentration drops, with the result that you feel hungry again and crave (and probably eat) more carbs. That's the postsugar "crash and binge" cycle, the root of sugar addiction. In addition, when your muscles are still fueled from your last snack, the insulin converts those extra calories into fat. And as long as large amounts of insulin remain in the bloodstream, your body won't have a chance to tap into your fat stores for fuel — so you won't burn any fat, either.

This cycle can eventually lead to insulin resistance, a condition in which your body produces insulin but the cells become insensitive to it — as a result, the insulin can't do its job to lower the glucose concentration in the blood. Insulin resistance is a precursor of type 2 diabetes and is common among overweight people. Elevated levels of glucose in your blood is a surefire sign of it.

There is hope for preventing the problem. The key is to maintain low levels of insulin by eating whole foods, pairing carbs with protein, and avoiding highly processed carbs. When your insulin-release mechanism works the right way, it helps keep your weight in check. When it's not working, you're in trouble. If you can take control of your insulin's ups and downs, you'll be primed to lose weight and restore your body's hormone power!