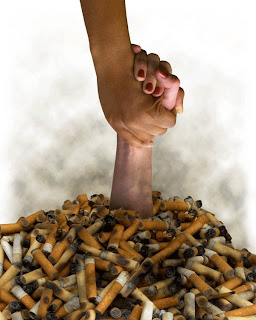 Why? Because I'm quitting smoking, and already know what a nasty, irritable bitch I will be to those that see me the most often.. LOL. Of course today is my first day, and yes, it's hard to quit, as I've been really focusing on it all morning, so that makes it pretty tough. Plus, I already feel the "nic-fit" as my heart is pounding in my chest, as my addicted self is craving a smoke. Yes, anyone can list tons and tons of reasons why smoking is bad, and I used to just reply "I love living dangerously!" It was my way of avoiding negative confrontation about it. I know later today will come the shaking I've gotten the numerous times before. This was usually the time I broke down and bought a pack (or when other's that lived with me got me one cause I was too insane to deal with.. lol) I have to do it this time. I seriously just can't AFFORD it anymore. When I think about the money I've wasted over the last 20+ years of smoking, it makes me crazy. I was hooked in my early teens, and it just seems to get worse and worse, and with the price increasing steadily over the years, it's not something I'm willing to go into debt over because of this stupid, idiotic habit. Every time I've tried to quit, I went back to it, smoking more than I did before! It's crazy. I know in a smoking cessation I took years ago, they said when you get the urge, do some exercise, because it will increase your heart rate and give you that "rush" as it releases some of the same endorphins that smoking does. Not sure how that's going to work AT work, but I'm sure I can think of things to get my mind off.

Anywho, I'm rambling. Wish me luck, or steer clear of me! hahaha! Have a great week!!

written by Cheryl Chamberlain at 9:20 AM