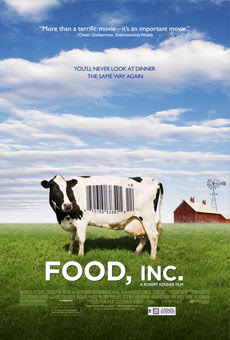 If there is one documentary you MUST see it's FOOD INC. The hubby and I watched it over the weekend, and let me tell you what a wake up call it was. Sure we know fast food is bad for us. We all know it, yet we are drawn to it any way. But what about the food in your local supermarket? If this film doesn't get you to think twice at the supermarket, nothing will. Some people "don't want to know", and that's their choice. But it truly helps explain the epidemic growths of not only obesity and diabetes, but things like ADHD, autism, and other disorders.

Excerpt from the website about the movie: "In Food, Inc., filmmaker Robert Kenner lifts the veil on our nation's food industry, exposing the highly mechanized underbelly that has been hidden from the American consumer with the consent of our government's regulatory agencies, USDA and FDA. Our nation's food supply is now controlled by a handful of corporations that often put profit ahead of consumer health, the livelihood of the American farmer, the safety of workers and our own environment. We have bigger-breasted chickens, the perfect pork chop, herbicide-resistant soybean seeds, even tomatoes that won't go bad, but we also have new strains of E. coli—the harmful bacteria that causes illness for an estimated 73,000 Americans annually. We are riddled with widespread obesity, particularly among children, and an epidemic level of diabetes among adults.

Featuring interviews with such experts as Eric Schlosser (Fast Food Nation), Michael Pollan (The Omnivore's Dilemma, In Defense of Food: An Eater's Manifesto) along with forward thinking social entrepreneurs like Stonyfield's Gary Hirshberg and Polyface Farms' Joel Salatin, Food, Inc. reveals surprising—and often shocking truths—about what we eat, how it's produced, who we have become as a nation and where we are going from here."

Fast Food Nation is also one to check out before you scarf down the dollar menu. It will definitely make you think twice. Same with Super Size Me and other documentaries that show the ugly truth about what all this crap food is doing to us, and what's worse, how the government's control, or lack there of, for the standards in the food industry is enough to make you sick.

These aren't "conspiracy" movies, but if the other side doesn't start talking, to me it's just further proof that the almighty dollar is worth more than any human life to our elected officials, and it's sickening. Rent it today, or check your cable on-demand for it!!!

written by Cheryl Chamberlain at 9:37 AM