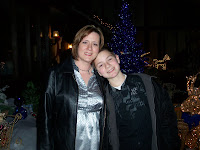 Liam left at 8am this morning to head back to Chicago with my parents and Hannah. What a great fun filled holiday weekend! There are so many things to be thankful for in my life that I cannot even get it all down in one journal entry. Liam got in Thanksgiving Day, and OMG is he TALL!!! LOL. He can almost look at me eye to eye, and the kid is in a size 9-10 men's shoe! Guess I'll have to stick to borrowing his clothes, because I haven't been able to fit in his shoes since last year when he was a men's 6-7.. lol. Hannah is growing as well, and it's just insane how quickly time passes us.

Dinner at the Ramada was just unbelievable. Every meat, fish, side dish and dessert imaginable. The food was incredible, and we left there all at least a pant size bigger. We walked around the hotel to look at all the mini trees the different local area companies decorated for Toys For Tots, and then in their courtyard was the biggest decorated tree I've personally ever seen!! Sure I've seen them on tv, but this was HUGE. It was donated from a local family farm. I barely got a picture of it!! 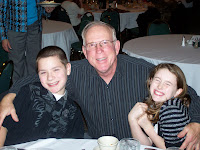 We headed back to the house for some Guitar Hero competition, and then my parents and Hannah left because Ry and Crusher were heading to bed, both having to get up for work btwn 1-3am. Sucks I know. After they went to bed Liam and I headed out to grab some stuff and went out to BB and rented some movies. I ended up crashing out because it had been a long day. Moreso for him and my family due to the 10 hr drive from Chicago.

My parents woke up Black Friday and headed to a few stores. I heard the lines for Best Buy, Kohl's and Toys R Us were insane. I'm not a Black Friday shopper, and usually do everything online, since it's the same deals, and free shipping.. lol. They came to the house and we headed out to Tyrone to Gardner's Candies to check out the Candy Museum and Ice Cream Shoppe. I just bought a little piece of almond bark, but Liam, Hannah and my Dad got these HUGE ice cream cones. 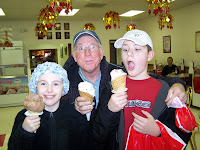 My mom had to get some stamps, so we took a stroll through Tyrone down to the post office, so they could eat their ice cream, and she could get her stamps. We then headed back to the house, and played a card/chip game called "Sequence" that my parents brought with them. I baked some lasagna and made a simple romaine salad, and then we bundled up and headed to downtown Hollidaysburg for their "Light Up Night".

It was cold and windy, but we had fun. We browsed through the local stores, moreso to keep warm than to shop.. hahaha. They had a man doing ice sculptures with a chainsaw. The kids saw Santa, and they had a petting farm. We headed over to check out the soup tasting contest, where the local restaurants competed for the best soup. Each line had about 50 people waiting so we just grabbed a few goodies and hot cocoa. They had bands there playing seasonal tunes, but the best was the Junior High School that have a percussion group called "Can It". With overturned plastic blue bins and old metal garbage cans, these kids rocked! The beats were contagious, and we danced to the drums as they did thei drumming, along with choreographed moves. They were unbelievable!! So talented! I was bummed because my camera battery went dead, and didn't get a very good picture of them, or later for the lighting of the tree. The kids got wacky balloon hats and after the towns tree and streets were lit up, we headed back home to relax. The kids watched Ice Age: Dawn of the Dinosaurs, and Liam passed out. My parents and Hannah said their good nights. 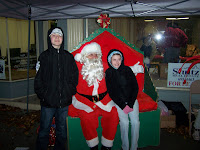 Saturday morning I made a huge breakfast for everyone... eggs, bacon, hashbrowns, toast, pancakes, the works. We then got ready and headed out to the Slinky Action zone to meet up with Ry's nephew Aidan and they had a blast running around, playing games, winning tickets, and they went on the bumper cars. I took the kids over for cake, ice cream and presents for Aidan's birthday, and my parents took that time to relax and do whatever they wanted, just the two of them. We then went and took Ry's mom with all of us to Lakemont Park for "Holiday Lights on the Lake". You drive through the park and all the local businesses have lighting displays. They were really nice. Lived here 9 years and never went through it. Leave it to my parents for getting my butt out there.. lol. 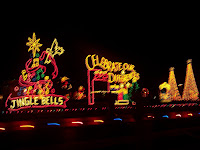 We headed back for some homemade chili and pumpkin pie that Ry made and the kids watched a movie while I uploaded the pictures from the weekend, and the parents bs'ed in the kitchen. We said our good nights, and I curled up with Liam on the couch. My dad picked him up this morning and it's been a very quiet day since then. I miss all the activity, giggles, running around and smiles.

I have a great family and feel very blessed. I'll see them all again come Christmas time when I head out to Chicago. Now it's time to go relax in a big bubble bath, and then get ready for work. Back to the grind tonight. Hope you all had a wonderful holiday with family and friends.

written by Cheryl Chamberlain at 6:06 AM