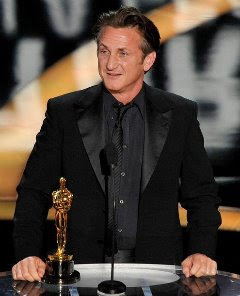 Sean Penn mentioned that protesters who lined the streets of Hollywood near the Oscar festivities were holding anti-gay signs. When introducing, Sean Penn, Robert De Niro said, "How did he do it? How for so many years did he get all those jobs playing straight men?"
Sean Penn, upon accepting the Best Actor Academy Award for his portrayal of the slain San Francisco Supervisor and gay rights leader Harvey Milk, "I think it's a good time for those who voted for the ban against gay marriage to sit and reflect on their great shame and their shame in their grandchildren's eyes if they continue that support. We've got to have equal rights for everyone."
Backstage, when asked what Penn would tell those protesters if he could, he answered, "I'd tell them to turn in their hate card and find their better self."
--------
kudo's to you Sean!!
written by Cheryl Chamberlain at 11:21 AM