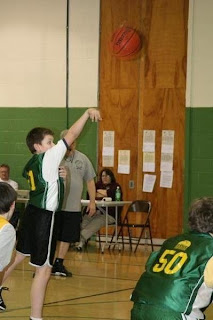 Last night after work, I took Maddie for a walk since it was nice out, and figured I would head down 4th Street and go get Liam from his friend's house. I walk all the way down there just to find out that he had went on down 5th Street and headed home himself. Even though I would have walked the same distance either way, it did kind of bum me out, as I know that Liam likes taking walks with Maddie. It was exercise for the day anyway.

We had some dinner, and then got ready for his game. Per usually JG Green kicked butt, and are still undefeated. Liam was fouled and got to try for two freethrow shots. He missed them, but my buddy Drew got some great pics of it. He also did some rebounding of missed shots and tried twice for more baskets. I think it was the most he's ever gotten his hands on the ball in a game. Usually the poor kid is just sprinting back and forth on the court blocking and never really gets a chance to shoot the ball. His principal was there, and just made me scowl. Only some people know the whole story of what transpired this week and last Friday, so you'll undertand why I have reservations toward him. Well, reservations is putting it lightly. But I digress. It was a great game, and I was excited for Liam.

We came home, and settled in for a bit, and both headed off to bed. Probably the most I've slept in a while, but awoke to this cold, rainy, icky weather. And it's only supposed to get colder this weekend. I cannot WAIT for warmth and sunshine!!

Well, back to the grind. Have a great day all :)
written by Cheryl Chamberlain at 9:10 AM