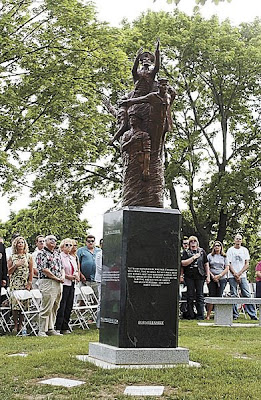 We had a family picnic down at Raystown on Saturday that was a lot of fun. Sunday was a bit of a lazy day, but Monday, Memorial Day, we headed to Grandview Cemetary here in town, as my husband's uncle Mike and his aunt Linda were in town for the unveiling of the monument they donated for the "Soldiers Circle at the cemetary. It was a proud day for my husband's family as well as all the families of the men and women that have served from this area.

Story from the Altoona Mirror:

"In Logan Township, crowds gathered to pay tribute to their war fallen, while California sculptor Paula Slater unveiled her tribute: "The Ascent of Heroism," a monument depicting the likenesses of veterans buried in Grandview Cemetery from seven U.S. wars, from the Revolutionary to the current wars in Iraq and Afghanistan.

"The statue is one-of-a-kind, for sure," said Peter Starr, president of the U.S. Navy League, who spoke at the event. "A lot of monuments depict nameless people, but five of the soldiers on this statue have the facial features of individuals who were laid to rest here. I think it really meant something ... to a lot of the people who saw it."

What was great was Admiral Bucchi from the US Navy was there and gave a speech. Admiral Bucchi is highly decorated with over 6000 flying hours, 1000 of them over hostile combat zones, and was an instructor at Top Gun. Very impressive, but the nicest guy!! It was an honor to shake his hand and be introduced to him. Senator John Eichelberger was there too, as well as the Blair County Commissioner. The momument is really a site to see, as I don't think there is anything more capitvating in this area, unless you go to DC to see the monuments there.

What the paper doesn't mention was that the artist Paula Slater handed out her sketched drawings of the individuals depicted on the statue in picture frames and gave them to the families. It was very touching.

All in all it was a low key, yet very memorable holiday weekend. Hope you all had a good one!
written by Cheryl Chamberlain at 10:31 AM