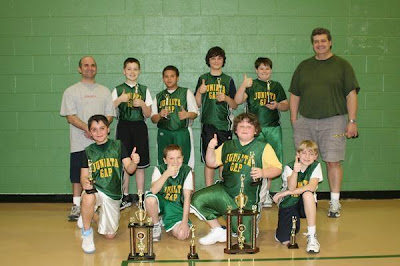 Last night was the boys basketball Championship. Juniata Gap Green against Mainline. We started out strong, taking a 12 to 2 lead, then they started closing in! It was an exciting game, and Liam had a blast. In the end, we came out on top and took the game 36-27. (click pic to see better) I was so proud of him and the boys for always showing great team spirit and tremendous sportsmanship. Liam was new to the team this year, because last year he buried the permission slip in his bookbag and I found it over a month after he was supposed to sign up. I have to give him credit, because although he got frustrated at times, I wouldn't allow him to give up, and he saw what hard work and determination can lead to. His coaches and teammates were alway encouraging and never made him feel like an outsider. Not like the football coaches in Hollidaysburg (yes, sore subject).
They were almost undefeated this year, with one loss, and it was to Mainline two weeks ago, so it was great to meet them in the final and come out on top!!
CONGRATULATIONS GUYS!!! GREAT SEASON!!!

(a special shout out to Drew D'Auria for all the great pics!! thanks hun!)
written by Cheryl Chamberlain at 10:18 AM