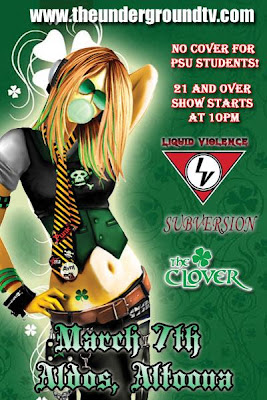 What a blast! I got to see Liquid Violence and The Clover for the UGTV's St. Patty's Party. As they say, no one drinks harder than a Clover girl, and drink I did! LOL

What a blast, getting up on stage with Liquid Violence and then dancing to The Clover. The first band Subversion was cool, but I was there to see my other two bands. The people that hadn't been there for LV the first time they were there really got into it, and the girls were crushing on the bass player Andy 13. All in all, it was a great time with great friends. Crusher, Barno and I headed on over to Tigger's house with Bobbi for a little bit, and I must say, I kicked some serious ass on the Wii hula hooping. Bobbi was lookin like she was swinging those hips for tips, and who knew Barno could move like that! Very impressive my man! hahaha.

Anywho, probably gonna head to work for a bit, clean up some filing and do some grocery shopping if the mood strikes me. Hope everyone had a great weekend!
written by Cheryl Chamberlain at 3:36 PM